Talking Tokens: The Road to Adoption in Mainstream Finance 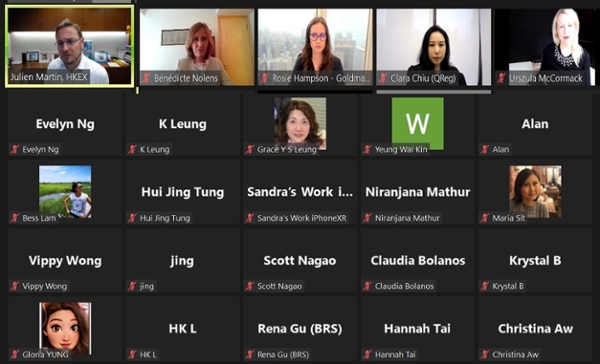 Crypto has been the new kid on the block since the first Distributed Autonomous Organization (DAO) and Initial Coin Offering (ICO) in 2017: token sales on public blockchains without underwriters, global trading for retail and institutional investors alike 24/7 at lighting speed on slick interfaces, and trading on decentralized exchanges combined with self-custody for those who desire so. Yet 5 years on, blockchains and tokenization have not yet taken over mainstream finance. Why is that? Is it because of resistance to change in traditional finance, the need for regulatory change, legal constraints, or are there other reasons? On March 24, WiFA was honored to host a panel titled “Talking Tokens”, delving deeper into these and related questions with experts from the Hong Kong Stock Exchange (HKEX), Goldman Sachs, King & Wood Mallesons, Q-Reg Advisory, and the BIS Innovation Hub. Within their institutions, the panel members are each are leading projects bridging DeFi and CeFi, seeking to bring digital assets into mainstream finance. Julien Martin of the HKEX noted that rather than disrupting highly liquid markets of existing products, the HKEX is actively working on creating new products in digital form, including in the ESG and carbon space. Rosie Hampson explained that Goldman Sachs is looking at digital assets from a broad range of angles, including the recent announcement that they will adopt the DAML smart contract language for its tokenization efforts, involvement in an OTC trade of crypto assets, and the involvement in public sector efforts such as the first tokenized European Investment Bank (EIB) bond in 2019. Urszula McCormack of King & Wood Mallesons explained that legal and regulatory regimes are catching up and that, with the February 2022 Circular of the Hong Kong Monetary Authority, Hong Kong is leading the way on clarifying the role of banks in the virtual asset space. Clara Chiu of Q-Reg Advisory, who was involved in the creation of the Securities and Futures Commission of Hong Kong’s virtual asset regime, observed that while in 2017 the question was whether to regulate or not, that the gap is increasingly narrowing between crypto assets and traditional asset regulation. In the context of the war between Russia and Ukraine, and the risk of crypto assets being used as a channel for illegal payments, both Urszula and Clara agreed that public blockchains make tracing easier, as demonstrated by the very fast blocking of thousands of Russian owned accounts by a leading U.S. crypto exchange.Overall, the panel members are acutely aware that in finance, the only constant is change. All agreed that we are only at the start of broader adoption of digital assets in mainstream finance and of material impact on financial market infrastructures – the way we trade and the way we pay, including through the tokenization of money and central bank digital currencies. We encourage our members to watch the full replay of the panel at: https://us06web.zoom.us/rec/share/_c1grbPHEy1PDYnlzTxYTVqV9-H_JAt4gEwXrn9uE9r17iEmcABFJaw98WvLU_VT.XN9F5y3B3MbuIh0o?startTime=1648095071000

Stay up to date with WiFA